Yesterday, an actress and model Aamina Sheikh shared the news with her fans that they are engaged again. Earlier, Aamina Sheikh was married to actor Mohib Mirza and the marriage turned into a divorce after fourteen years later. The couple also had a 4-year-old daughter. Now, she lives with her mother.

Neither Mohib Mirza nor Aamina Sheikh spoke openly with their fans about the reason for the sudden divorce after 14 years. While Aamina Sheikh has been rarely seen in the drama industry for some years, she spends most of her time in the United States with her family.

After divorcing Mohib Mirza. In just a few days, actress Aamina Sheikh has got engaged to renowned businessman Omar Farooqui for the second time. While Aamina Sheikh’s second husband Omar Farooqui is also the founder of Code Minded Internet Company.

As the news spread like wildfire on social media, people were eagerly waiting to see pictures of Aamina’s husband Omar Farooqui. So let’s take a look at some pictures of this couple’s engagement together. 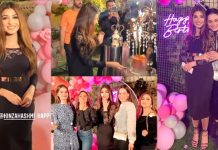