Ayeza Khan and Danish Taimoor are one of the most popular couples in the Pakistani showbiz industry. While they are both very beautiful as well as a talented actor. It would not be wrong to say that Ayeza Khan has gained a lot of fame in showbiz in a very short span of time.

Ayeza Khan and Danish Taimoor got married 6 years ago in 2014. But they had known each other for 12 years before marriage. Ayeza and Danish are also considered to be the ideal couple of showbiz. Because their love is absolutely heartwarming.

While in the year 2019, Aiza Khan is also counted among the actors who get paid the most for doing a drama. While her famous drama serial “Meray Paas Tm Ho” took her to greater heights of success.

After marriage, Allah Almighty has blessed Ayeza and Danish with a son and a daughter. Both children are as beautiful as their parents. While Ayeza Khan often shares her photos with her children on social media.

Today, six years have passed since the marriage of Ayeza Khan and Danish Taimoor. While seeing their love, it seems that their marriage has just happened a few days ago.

While celebrating her 6th wedding anniversary on this happy occasion, Ayeza Khan also gave this message to her husband Danish Taimoor.

I don’t believe in soulmates. I don’t believe there is a perfect human being for every one of us out there. It’s just that every relationship takes time, sacrifices and a ton of hard work to succeed.
It’s been six years since our marriage and almost more than 12 years since I have known him, and I can tell you one thing. I have never felt more comfortable or safe around any one else but him. And I am nothing but grateful for that. He may not be my soul mate but he’s definitely someone that my soul needs.

Let’s see what kind of romantic photoshoot Ayeza Khan and Danish Taimoor did on their 6th wedding anniversary. 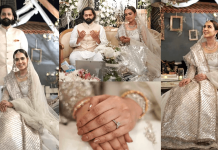