Nida Yasir is a renowned morning show host and one of the talented actresses. Nida performs the morning show in such a way that every child and every old person can have fun and watch their program.

Nida Yasir has been in the showbiz industry for almost twenty five years. And despite being 45 years old, she still looks like a 25-year-old girl. Which is why they still look beautiful and smart.

If you look at old photos, you will say that Nida has changed a lot. Because in our society, no woman wants to be old, so Nida Yasir always wants to look young.

You all know that Nida Yasir married director, producer and actor Yasir Nawaz. Indeed, her husband is according to her temperament. Due to which, the couple keeps sharing their romantic photos on social media.

After easing the lockdown, Nida and Yasir went to Dubai for a vacation with their children and shared photos of the swimming pool with their fans. 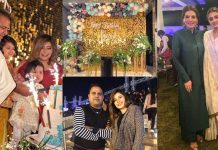