Humayun Saeed’s actor brother Salman Saeed just got married to Aleena Fatima a few days ago. While famous Pakistani celebrities also attended their wedding. Because of the lockdown, very special guests were invited to the wedding function.

Humayun Saeed’s brother Salman Saeed is also a famous actor who is often seen acting on every Pakistani TV channel. If you look at his pictures, they look like photocopy of his brother Humayun Saeed.

Salman Saeed’s wife is from Lahore while he himself lives in Karachi and his wedding ceremony was also held in Karachi. When the wedding photos went viral on social media, people were forced to applaud the bride’s picture.

Today, Nida Yasir invited Humayun Saeed’s brother Salman Saeed to his wife Aleena Fatima in his Good Morning Pakistan Show in which she talked in various ways and had a lot of funny conversations with them. So let’s see some beautiful pictures of newly wed couple.

After looking at the pictures, don’t forget to tell us do you like Salman Saeed and his wife. 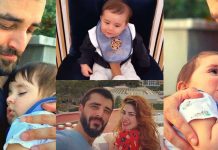