Famous and well-known Pakistani designer Ali Xeeshan does not need any introduction. People have been waiting for the launch of his new bridal collection all year round.

He has recently married a girl named Myra Khan. Sources have revealed that Ali Xeeshan’s wife is a reporter. And she also looks very smart and fit like her husband.

Ali Xeeshan who is famous for introducing new stylish dress collections and new designs in the Pakistani fashion industry people come from all over the world to see his designer dresses.

You all know that Ali Xeeshan is fond of new fashions. He also wore slightly different clothes at his wedding. People also made fun of his on social media after seeing his dressing up at his wedding.

But while celebrating his first birthday after marriage with his wife Myra Khan, He once again did a style dressing on which people said that designer Ali Xeeshan only brings new fashion.

So let’s take a look at some beautiful pictures with his wife celebrating his birthday. In which their eyes are covered with a shining bandage. 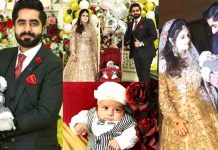