After marrying Ahad Raza Mir, Sajal took a break from the drama industry for a few months. But now she is on a set with senior actress Resham. Looking at the video, it is clear that she is busy shooting a drama.

Actress Resham is now 52 years old but she is also unmarried but looking at her fitness it looks like she is a young girl of 25 years. But unfortunately, she is still looking for a good boy even after completing half a century. And most of the time we see Resham doing a bridal photoshoot at a clothing brand but people say when will we see you as a real bride?

Three years later, when Resham and Sajal Ali met, they fell in love with each other. A video of the two is viral on social media in which they both look very happy, so let’s watch that video too.

Do you guys show the same love when you meet your friend after so many years?. Don’t forget to leave a comment in the comments section below. 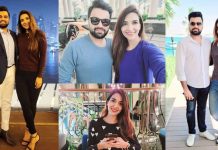 Rabab Hashim And Sohaib Shamshad New Pictures on Their Honeymoon