The magic of the voice of Pakistani singer Aima Baig, who has sung countless famous songs, makes everyone listen to her songs over and over again. Because her voice is so sweet that it speaks very sweetly even in a normal routine.

Aima Baig is now 25 years old and still unmarried. In an interview, when asked about marriage by a fan, she said, “Let me grow up first, then when I grow up, I will get married.” Because she is still a child and is having fun in her life.

Many people may not know is that Aima Baig has become a singer as well as a famous model of Pakistan. A photoshoot with actor and singer Farhan Saeed is going viral on social media in which both look very cute.

Looking at the photos of her photoshoot, some people also said that Emma is looking exactly like the Hollywood supermodel and actress Kylie Jenner. If you guys think so too, you will definitely give us your opinion in the comments action below after seeing the photoshoot. 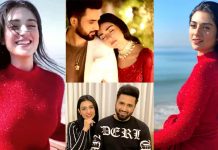 Fahad Sheikh Beautiful Pictures With His Wife And Kids

Beautiful Pics of Saleem Mairaj With His Wife And Kids

Shaista Lodhi Beautiful Wedding Pictures With Her Husband And Kids 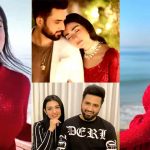 Showbiz Staff - December 3, 2020
0
After getting married, it seems as if the lottery of Sarah Khan and Falak Shabir has come out. Because their fame has...

Rahim Pardesi First Time Shares Pictures of His both Wives

Showbiz Staff - December 2, 2020
0
Rahim Pardesi is one of the biggest YouTubers in Pakistan and it is enough to name him Nasreen to introduce him. His...

Fahad Sheikh Beautiful Pictures With His Wife And Kids

Showbiz Staff - December 2, 2020
0
For the past few months, pictures of Minal Khan and Ahsan Mohsin Ikram together have been going viral on social media. And...
Load more
© 2020 Showbiz Pakistan. All Rights Reserved.