The most beautiful Pakistani actress who is one of the highest-paid actresses in showbiz. Almost every boy and girl is obsessed with her beauty. Whenever she is seen in an interview, the people who come there are seen asking her the secret of her beauty.

You must have understood that we are talking about Pakistani actress Mahira Khan. Of course, we may not have enough words to describe them and she cannot be defined. Suffice it to say that everyone around the world knows and recognizes her by her name.

While Mahira Khan has also been honored by Pakistan that she has worked with Bollywood’s King Khan Shahrukh Khan as the lead actress. And the number of her fans is also found in India with a large number of people and people are also waiting to see Mahira Khan’s film in India again.

Mahira Khan has taken a break from working in the Pakistani drama industry for years and has spent most of her time doing modeling photoshoots or acting in Pakistani films. And she has become an ambassador for many Pakistani and international brands.

A photoshoot of actress Mahira Khan is going viral on social media in which she has adopted the style of boys, so let’s take a look at some beautiful pictures of her.

Aiman Khan Vacationing With Family In Northern Areas Of Pakistan 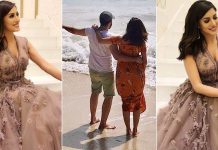