Last week, when photos of a lavish wedding went viral on social media, people wondered what kind of lucky big man the wedding photos were. But the next moment people found out that these wedding photos are of Master Tile’s son. He is getting married to Jalal Sons’ daughter. Of course, looking at the wedding photos, you may have used the same slogan that a lot of money was spent.

The wedding was held in Lahore and was also attended by famous celebrities, religious scholars, and politicians. Only wedding decorations were over-represented that the eyes of any poor man should be left open. Money was showered everywhere, be it wedding food or music or welcoming guests. But the man who attended the wedding was no ordinary man. Because people had taken their time months in advance to attend this wedding.

In this wedding ceremony, Rahat Fateh Ali Khan made people happy by singing in his melodious voice at the Mehndi event. On the other hand, singer Atif Aslam along with his wife also looked very happy in this marriage.

When people saw the picture of the cake at this wedding ceremony, Immediately some people chanted the slogan that it has made a bigger wedding cake than the Burj Khalifa. You will need a ladder to cut this cake. When it comes to food, people have only five minutes to think about what to eat. Meaning all kinds of food dishes were kept for the guests inside the wedding.

But when some people see the pictures of the bride and groom, they start joking that they are having such an expensive wedding and they are both sitting on the stage and looking sad. Some people also said that their fights have started from the first day of marriage.

Talking about this marriage, time may be short and we just keep writing words but the news is going viral on this social media. The FBR has sent notices to both parties on how the money was spent on this wonderful wedding.

The notice that was sent falls under Section 176 of the Income Tax Ordinance, 2001, which asks Mr. Iqbal to provide his financial details. If any tax fraud is found in this case, strict action will be taken against both the parties.

Many people here expressed their grief at seeing this marriage, while some people wished them well. They wrote that Allah Almighty has blessed them with money. He should spend a little money on his happy time. And some people have written that Allah will keep the couple safe and help them to understand each other.

After reading such a long article, don’t forget to tell us in the comments section do you like this lavish wedding ceremony. 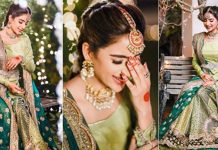