You all know that actress Aiman Khan was very fond of traveling before marriage and she used to go abroad for holidays almost every month. But after the marriage, there was a holiday break in her life and she started giving time to her in-laws.

Two days ago, Aiman Khan invited Fahad Mustafa’s show Jeeto Pakistan in which he wore a black frock and people praised her beautiful dress and some people even asked the name of the designer. And really she was looking like a doll wearing this black dress.

With the arrival of Aiman Khan as a guest on Pakistani TV channels, it seems that she will soon be seen working on the screens of dramas. Because after getting married, she has not done any new drama for the last two years. 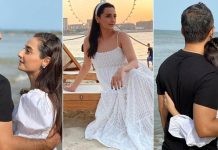