Nabeel Zafar, who has played all sorts of roles in the Pakistani drama industry, who certainly doesn’t need any introduction, looks like he’s very funny in real life. But in real life and with his family, it’s the opposite.

Nabeel Zafar started his acting career in 1990. And gradually he made a name for himself by acting in small roles. When a person’s intention is clear, it is very easy to reach the destination. This is what happened to Nabeel Zafar. One day he achieved the position he was supposed to achieve.

Nabeel Zafar got married very early in life. After marriage, he became the father of two sons and a daughter. But he is not at all interested in bringing his wife and children to the showbiz, which is why his family does not appear in the showbiz.

After watching Nabeel’s most popular drama serial Bulbulay, people were saying that what would Nabeel’s wife look like in real life, would she be as beautiful as Ayesha Omar?. So let’s take a look at the beautiful pictures of Nabeel’s real wife and their children in this article today. 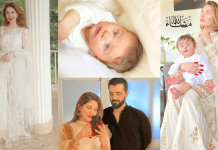