Actress Hina Altaf, who entered the world of acting at a very young age, made her mark in a very short time. She was so fond of acting that she could not sleep all night so she had to get up in the morning and go shooting. And today she has proved herself.

By the way, Hina Altaf has shown her acting style in small roles and big roles in Pakistani dramas. And people like acting in each of her roles very much. And people ask the question on their Instagram what is your new upcoming drama.

Many people will know that Agha Ali and Hina Altaf have started their married life by getting married. And after getting married, she has become a favorite couple in the Pakistani drama and film industry. And when people see the two of them together, they send their best wishes and prayers a lot.

Some pictures of Hina Altaf on social media are going viral in which she is looking very beautiful wearing an orange bridal dress. Some people said that she did not look very cute at her wedding. And she looks much better in this photoshoot. So let’s take a look. 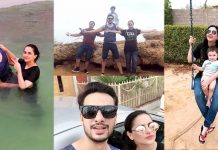