There are many girls in the Pakistani drama industry who started acting at a very young age but after marriage, they have taken a break from acting due to in-laws. Yes, one of them is Pakistani actress Sarah Razi Khan.

Many of you may not know that Sarah Razi Khan is the elder sister of beautiful actress Arisha Razi Khan. And both sisters are very good-natured and great performers. And the two sisters have also opened their own clothing brand after gaining immense fame.

Arisha Razi Razi is still unmarried but Sarah Razi Khan started her married life by marrying her cousin 2-3 years ago. And now, by the grace of Allah, Sarah has become the mother of a daughter and she has named her daughter Mirha.

Sarah Razi Khan has completely disappeared from the TV screen after marrying her cousin. And for now, she wants to give her daughter and in-laws plenty of time. And while her sister Arisha is busy shooting new dramas.

But in today’s article, we will see some beautiful pictures of Sarah Razi Khan with her daughter, in which mother, daughter, and Khala are looking very happy. So let’s take a look. 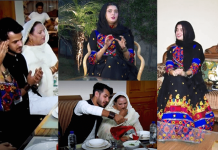 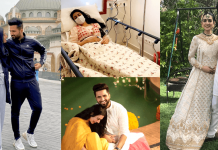 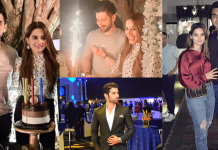