Many of you may not know about the model and actress Sonya Khan. Yes, she is a well-known model and has also acted in some successful Pakistani dramas. But she is not currently seen modeling and acting. Maybe she has taken a break for a while.

As beautiful as Sonya Khan looks, she is also very good at heart in real life. But many will not know her much because she is less active on social media. But even now, she has more than 50,000 followers on Instagram.

Many people looking at pictures of Sonya Khan with Salman Iqbal will not know that Sonya Khan is Salman Iqbal’s second wife. And as for Salman Iqbal, you all know that he is the owner of ARY Group and the Karachi Kings team. And now by the grace of Allah, Sonya and Salman have become parents of two daughters after marriage.

So in today’s article, we will see beautiful pictures of Sonya Khan with her husband. If you look at the pictures, Salman Iqbal’s daughters are photocopies of their father. So let’s take a look. 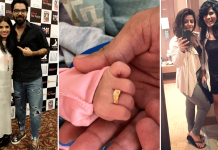