Sajal Ali, a young and talented actress from the showbiz industry, has become the center of attention with her successful performances in both the Pakistani drama and film industry. And of course, the innocence of her face affects people a lot.

Sajal Ali started her married life in 2019 by marrying actor Ahad Raza Mir. And at the moment she is only 26 years old. Some of you may not know is that she is also the elder sister of actress Saboor Ali who is currently performing in Geo TV’s Fitrat drama.

Sajal Ali attended the DIAFA 2020 last night. This is the Dubai Best Award every year. In which actors from all over the world are honored for their outstanding performances in films and dramas. This proves that it brings out the talents of the artists.

Pakistani actress Sajal Ali won the DIAFA 2020 this year. Last year, this award was won by Mahira Khan in the year 2019. You will definitely appreciate Sajal Ali’s amazing black dressing at the awards ceremony, so let’s take a look at her beautiful pictures. 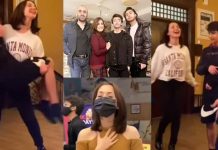