Naimal Khawar, a very successful and beautiful actress, got married to Hamza Ali Abbasi with great simplicity last year. Before she got married, she announced that she would no longer work in the showbiz industry. To this day, no one knows why she suddenly left Showbiz.

If we talk about her age, she is now 27 years old. As well as acting, she is also a well-known model and visual artist. But after marrying Hamza, she is far from all that. People are seen asking her the secret of her beauty on her Instagram account. She has confirmed many times that she only follows indigenous tips.

She did her first and last play Anaa with actor Usman Mukhtar. And the play was a record-breaking success. On the other hand, she has also played the role of a heroine in the film Verna with actress Mahira Khan. And this movie too, people went to the cinema with great interest.

Naimal Khawar has shared some pictures from her sister Fiza Khawar mayun ceremony on her Instagram. And she is just getting married in a few days and is about to become a beautiful bride. So let’s take a look at some mayun highlights. 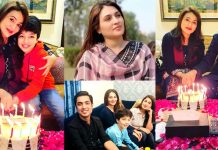