Naimal Khawar’s younger sister Fiza Khawar’s wedding is going on with great fanfare on social media. From time to time, she shares pictures of each event with her fans on her Instagram account. Seeing the beauty of these three sisters including Naimal, fans are seen asking what is the secret of their beauty.

27-year-old actress Naimal Khawar says goodbye to the showbiz industry because of her husband Hamza Ali Abbasi. And today she is busy spending precious time with her son and in-laws. If we talk about Naimal Khawar’s profession, she is a great visual artist. And while her husband is busy writing a book.

Some people also say that Hamza Ali Abbasi will soon be seen working on the screen again. But they will work on projects that send a message to humanity. Because he had distanced himself from the showbiz industry by saying that he would now spend the rest of his life following the principles of Islam.

But in today’s article, we will see that Nemal Khawar’s sister-in-law Dr. Fazeela Abbasi with her brother Hamza Ali Abbasi. Some people, after looking at the pictures of Nanad, said that she is a photocopy of Bollywood actress Katrina Kaif. Let’s take a look at some beautiful pictures from Fiza Khawar’s wedding. 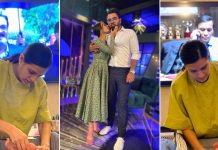 Latest Pictures of Saad Qureshi With His Wife