The drama serial Nand is currently the center of attention in every home. Faiza Hassan’s aka Gohar brilliant performance remained the highlight of the serial.

But after Gohar got revenge for her evil deeds in the drama serial, people were expecting that the drama would end now. But the production house had some new ideas and they decided to lengthen the play.

But the only surprise here is that the main character of the play is being changed now and Faiza Hassan will not be a part of the play. And in her place, Javeria Saud has been replaced, and she will be seen playing a significant role in the drama from now on.

Javeria Saud in her latest interview talked about Nand’s drama and shared her experience and explained why she was suddenly cast in place of Faiza aka Gohar in Nand.

She further said that she had worked in Humayun Saeed’s production in drama serial Anna 20 years ago and now she will be seen working in Fahad Mustafa’s production Big Bang.

She said, I like this role very much and Faiza has done it with great skill. Due to some personal reasons, she could not continue this role. What else did she say? Let’s listen to her interview. 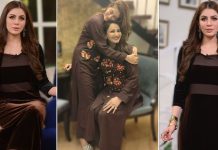 Katrina Kaif And Vicky Kaushal’s Wedding Seems All About Restrictions, A Long List Of Restrictions Is Out