Saheefa Jabbar Khattak is naturally so beautiful that looking at her pictures, everyone seems to be asking her the secret of her beauty and fitness. If we talk about her age in the year 2021, then she is 32 years old. And she still looks unmarried.

Saheefa Jabbar Khattak started her married life in 2017 by marrying Khawaja Khizer. And the couple has not yet become parents. On the other hand, she has also won the Best Emerging Model award in the Lux Style Awards. And her ARY Digital drama serial Beti will always be remembered by the people.

Saheefa Jabbar Khattak had stepped into the world of acting as a model. And then the drama directors and producers started taking her in small roles. And their first play, Teri Meri Kahani, was aired on Hum TV. And it just turned out to be a breakthrough for her career and it didn’t take long for her to reach the heights of fame.

Some beautiful pictures of Saheefa Jabbar Khattak modeling a well-known brand that makes exercise clothes are going viral. It can be seen in the pictures that she is looking very beautiful wearing a gym dress. So let’s take a look at some beautiful photos from their new photoshoot. 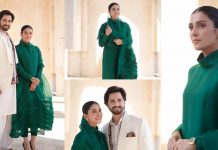