Some beautiful photos and videos of Pakistani actress and model Ushna Shah celebrating her 31st birthday with close friends have gone viral on social media. In the pictures, it can be seen that their friends are very modern and all the girls are wearing western dress.

Ushna Shah entered the world of showbiz at a very young age as she had a passion for acting since childhood. When she started getting small roles, she showed so many great performances on TV that the director people started casting her in the lead role. And you must remember her successful drama serial Balaa with actor Bilal Abbas Khan.

Here we will tell you one thing that besides acting, Ushna Shah is also a famous model. She was seen walking the ramp in bridal dress at HUM Bridal Couture Week 2021 last week in Lahore. And people liked her style a lot. One more thing to say here is that she is 31 years old but still unmarried and she is also looking for a good boy to marry.

But in today’s article we will see that after Hania Aamir, now actress Ushna Shah is celebrating her 31st birthday with great fanfare with her close friends. Her best friend Ayesha Omar is also present on the occasion of her birthday. So let’s take a look at some beautiful pictures with their friends celebrating their party after midnight.

Don’t forget to congratulate your favorite actor Ushna Shah on her 31st birthday. Thanks! 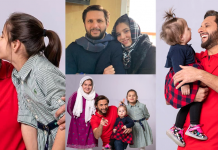