Some beautiful pictures of Reema Khan spending time in the USA with her husband Dr. Tariq Sahib and celebrating holidays are going viral on social media. It is clear from the pictures that she prefers to wear eastern clothes while living in the United States. And she never follows Western culture or Western dress.

If we look at the age of Reema Khan in the year 2021, then she is 50 years old. And now she is not seen working in any new Pakistani drama or film. She is spending time in America with her husband and in-laws. When she arrives in Pakistan a year later, she is seen hosting a Ramadan transmission on some private TV channel.

Let us tell you one thing here that Reema Khan started her married life by marrying Dr. Tariq Sahib at the age of about 40. And by the grace of God, she has become the mother of a son. If we talk about Reema Khan’s showbiz friends, then Jaan Rambo, Sahiba, Shaan, Waris Baig, and Resham are her best friends.

But in today’s article, we will see some beautiful pictures of Reema Khan with her husband on holiday in the United States, in which it can be seen that she wears Pakistani cultural clothes while living in the United States. And people love her unique style, which is why she gets so many compliments on social media. So let’s take a look at the 2021 photos of Reema Khan with her husband.

Do you also like Reema Khan’s acting? If so, don’t forget to tell us in the comments section below. Thanks! 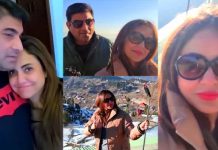