Wedding photos of famous Pakistani actor and writer Muhammad Ahmed’s daughter Urooj Ahmed are going viral on social media. It can be seen in the pictures that the father and daughter are taking a photo shoot together on this memorable day.

Mohammad Ahmed likes to act only in dramas that suit his mood and he mostly works in roles that are related to daughters. And if you take a look at his plays, he appears in the role of a father. But he has stopped writing for a few years now and is now seen acting in dramas. And people like his personality a lot.

Don’t forget to congratulate Mohammad Ahmed’s daughter on her wedding ceremony. Thanks!

Sarah Khan Said That Whenever She Became Pregnant, She Would Give Birth To Twins 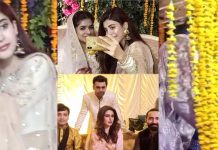 Recent Clicks of Actress Urwa Hocane From Her Friend’s Wedding