Hiba Bukhari is considered one of the young and talented actresses of the Pakistani showbiz industry. And her real name is Hiba Qadir. What is special about this actress girl is that she does not like to make many friends while living in showbiz. She started her showbiz career with a very small supporting role. And when she performed brilliantly in her small role, she immediately started getting work in lead roles. She has also won the 6th Hum Award for Best Actress. So let’s take a look at Hiba Bukhari’s biography.

Hiba Bukhari graduated in Commerce from St. Joseph’s College For Women, Karachi. And she completed her undergraduate degree from Karachi University.

Hiba Bukhari has confirmed in Nida Yasir’s morning show that she is not in the mood to get married yet, she is also just giving time to her showbiz career. But before concluding, she said that if she found a good boy in the meantime, she would marry him immediately.

Hiba Bukhari is considered as one of the top 10 actresses in Pakistan. The drama in which she works is definitely a success. And she doesn’t like to work in dramas all the time. She likes to work in only three dramas a year and she wants to spend the rest of the time with her family. What is special about her is that she first reads the drama script well and then thinks and agrees to work in the drama. So far, all the Pakistani dramas that Hiba has acted in have been 99% successful and people have liked them very much. So let’s take a look at Hiba Bukhari’s drama list that she has done so far.

Hiba Bukhari belong to a very small family. No one in her family is from Showbiz. She has two brothers and a sister. But her siblings do private jobs. Hiba was interested in becoming an actress since her childhood, which is why she selected the field of showbiz. And she worked hard day and night to reach the goal of success. And of course her family and her siblings have a very supporting role in this success.

Hiba Bukhari is not fond of taking more pictures which is why she has very few images on Google. And she hasn’t even created an official account on her Instagram yet. If another actor or actress secretly takes pictures of her while shooting, some of those pictures go viral on social media. Because this actress likes to live in simplicity. One of her specialties is that she never attends any showbiz party because she is not allowed by her family.

When it comes to Hiba Bukhari’s acting, people like her more than Ayeza Khan. Because she appears in very serious dramas and she is very simple in real life. She is naturally so beautiful that the viewer immediately becomes a fan of her. And when people ask her the secret of her beauty, she says I don’t do anything, I don’t even know how to do makeup. Of course, the simplicity of this actress is exemplified in showbiz.

Hiba Bukhari is not very fond of making new dresses, she wears the same dress that are in her closet. She is occasionally seen in a photo shoot of clothes of a well-known Pakistani brand. And because of her family’s limitations, she only does simple shalwar kameez or bridal photo shoots. But whenever her photo shoot goes viral on social media, she looks like a princess in every one of her photoshoots.

And if you guys liked this short biography written on Hiba Bukhari, don’t forget to tell us in the comments section below. And if you guys know any secrets about Hiba Bukhari that we don’t know, So you will definitely tell us. Thanks! 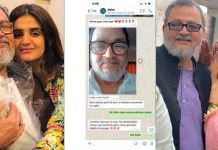 Hira Mani Shares An Emotional Note About Her Late Father