Some beautiful pictures of Bushra Ansari with her younger sister Asma Abbas participating in Nida Yasir’s morning show have gone viral on social media. It can be seen in the pictures that both the sisters are wearing shalwar kameez, which the fans are very happy to see. Otherwise, Bushra Ansari is often seen wearing bold dresses even at this age.

Bushra Ansari started her showbiz career at a young age when she was not even married. And now she is 64 years old in the year 2021. But it is unfortunate that Bushra Ansari has divorced her husband Iqbal Ansari after 37 years of marriage. She also has a son and a daughter from her first husband. And her daughter is an actress like her mother and her name is Meera Ansari.

On the other hand, if we talk about Asma Abbas, she is the younger sister of Bushra Ansari and she is also considered as one of the successful actresses. And maybe many of you don’t know that she is the mother of actress and model Zara Noor Abbas. Asma Abbas is a Pakistani drama actress as well as a famous film actress. It would not be wrong to say that the entire family of Bushra Ansari has got acting in their blood.

But in today’s article, we will see that Bushra Ansari attended Nada Yasir’s Morning Show with her sister Asma Abbas. And the two sisters were wearing branded shalwar kameez. People really liked the style and eastern dress of these two sisters and they got a lot of compliments. So let’s take a look at the pictures of them participating in the morning show.

Do you like Bushra Ansari’s dramas? If so, please let us know in the comments section below. Thanks! 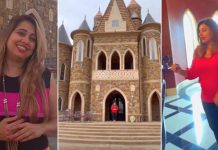