Pakistani actress and model Mehwish Hayat needs no introduction. She started her showbiz career with very small roles. Because at that time she was only 21 years old. So she was just obsessed with becoming an actress. So the role that would have been offered to her would have been accepted to work immediately. And just worked hard day and night and today her name is in front of all the people.

38-year-old actress and model Mehwish Hayat who is still unmarried. And at the moment she is not in the mood to get married. Because she doesn’t want anyone to come and restrict her free life. This is why she just wants to make her film career more successful right now. And as a film actress, she now considers it an insult to work in dramas. That is why she has not acted in dramas for 5 or 6 years.

Mehwish Hayat is also counted among the only Pakistani actors to be awarded the Medal of Distinction (Tamgha-e-Imtiaz). And when she received the award, she faced a lot of criticism in the media. But she did not respond to the people’s words, listened to them with one ear, and took them out with the other ear. If we talk about her most successful film, Punjab Nahi Jaungi, people liked it a lot.

But in today’s article we will see that when Mehwish Hayat participated in Vasay Chaudhry’s program Ghabrana Mana Hai, she participated in western clothes. When people saw her viral pictures, they started saying that these Pakistani actresses should be ashamed. Doing such dressing while living in an Islamic country does not beautify these actresses. So take a look at the viral pictures of Mehwish Hayat.

Would you also like to see Mehwish Hayat working in films as well as in dramas? If so, will definitely tell us your opinion in the comments section below. Thanks!

Beautiful Family Pictures of Kamran Akmal With His Wife And Kids 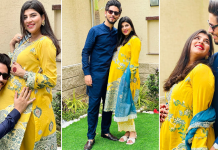