Pakistani cricketer and former captain Shahid Afridi attended the morning show of famous morning show host Nida Yasir three years ago. In the special show of Good Morning Pakistan, he talked to the host on every topic related to him. And the show has received millions of views on YouTube. And when the host asked how he got married to his wife Nadia Afridi? What is the story of how your relationship happened? So Lala answered all these things in a wonderful way.

Shahid Afridi and his wife Nadia Afridi have been married for almost 20 years. And now the couple has become the parents of five daughters. And while the good news is that his eldest daughter Aqsa Afridi is soon to be engaged to cricketer Shaheen Afridi. And the Afridi family has confirmed this. And in the year 2021, Shahid Afridi has turned 44 years old. After retiring from cricket, he is giving time to his foundation. And he spends most of his day and year doing charity work.

Shahid Afridi lives with his entire family in Area Defense Phase VIII of Karachi and has built his own house there with his own hands. And he has made his own home video and uploaded it on YouTube. In addition, on the success of Shahid Afridi in 2013, the Pakistan Film Association made a film in his name which was named Main Hoon Shahid Afridi. He also has siblings who run their own businesses. And his older brothers have also played cricket.

Shahid Afridi’s family belongs to a Pathan family which is why his women do not go to many parties. But despite this, Lala’s daughters are often seen in cricket stadiums supporting him. And while he is also seen playing for the Multan Sultan team in the 2021 Pakistan Super League. There was a time when Lala came to bat and bowl and the whole Indian team trembled in front of him. And that’s why even today if the public finds out that Afridi has become part of a team, they will definitely come to the stadium to buy tickets because of him. This is Lala’s glory.

See how Shahid Afridi and his wife Nadia Afridi met.

Of course, you too will become a fan of Shahid Afridi after seeing his simplicity. Do not forget to remember Lala and his family in your precious prayers at all times. Thanks! 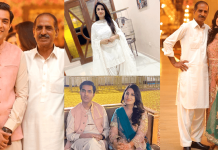