It would not be wrong to say that Shaista Lodhi is called the princess of the morning show. Because she has been hosting morning shows for the last 10-12 years. And yet looking at her perfect fitness everyone understands that Shaista Lodhi will be unmarried yet. But here we will tell you that Shaista Lodhi got married three times in her life and two marriages turned into her divorce while the third marriage was with her cousin Adnan Lodhi. With which she is also living a successful and happy life.

If we talk about the age of Pakistani actress and model Shaista Lodhi in the year 2021, she has turned 44 years old. And many of you may not know that she is also a professional doctor by profession. On the other hand, she is the younger sister of renowned Pakistani film star Sahir Lodhi. And while she has now apologized to every private TV channel for hosting the morning show and is currently giving her clinic full time. But this year she will be seen with Nida Yasir doing an Eid telefilm (2021) on ARY Digital.

Shaista Lodhi has two sons and a daughter from her first husband. Now her three children are young. On the other hand, Shaista Lodhi’s eldest son Shafay Wahidi has also opened his own company. In which they make products related to their personal cosmetics. And if you look at the pictures of Shaista’s eldest son, it looks like Shaista has a childhood. But for now, Shaista has confirmed in her interviews that she has no plans to bring her three children to showbiz. Because she wants her children to complete their good education first.

But in today’s article, we will see that well-known morning show host Nida Yasir went to Shaista Lodhi’s clinic and did her morning show. And they both talked a lot about women’s skin problems. And also gave unique tips to get rid of this problem. On this occasion, there is a boy with Nida Yasir and Shaista Lodhi who is wearing a black T-shirt. You may not know that he is the eldest son of Shaista Lodhi whose name is Shafay Wahidi. So let’s see the pictures of young mother and son participating in Nada Yasir’s morning show.

Do you know what is the secret of Shaista Lodhi’s fitness despite having three young children? If yes, will tell us in the comments section below. Thanks! 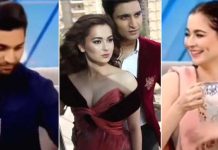