Incumbent President of Pakistan Arif Alvi and his wife Samina Alvi participated in Nida Yasir’s Ramadan Special Program Shan-e-Suhoor. And Nida Yasir had to go to the President’s House to take this interview. On this occasion, the morning show host wore a shalwar kameez resembling the white color of the Pakistani flag. And of course, she looked like a beautiful woman.

Let us tell you one thing here that Arif Alvi is an important leader of PTI and he is the 13th President of Pakistan. And he is a professional doctor by profession. He received his bachelor’s degree in medicine from De’Montmorency College of Dentistry. And after that, he did his Master’s in prosthodontics from the University of Michigan in 1975. And after coming to Pakistan, he started his dentistry practice and set up Alvi Dental Hospital.

Here we will tell you that Arif Alvi is married to a very beautiful woman Samina Alvi and after marriage, they are now the parents of four children. But their children are busy completing their education. And at the moment, no one from his family intends to enter politics. Arif Alvi and Prime Minister Imran Khan were best friends at a time when the Pakistan Tehreek-e-Insaf (PTI) did not even exist. And even today, their friendship is as strong as ever.

But in today’s article, we will see that the famous Morning Show Host Nida Yasir reached the house of the current President of Pakistan and his wife to interview them. And on this occasion, Nida was wearing a very beautiful dress which was also representing the flag of Pakistan. Arif Alvi and his wife, on the other hand, were wearing shalwar kameez, which certainly represented Pakistani culture. So let’s take a look at their pictures.

Those who watched this special Ramadan show (Shan-e-Suhoor) of Nida Yasir on TV at night will definitely mention it in the comment section below. Thanks! 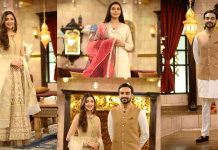 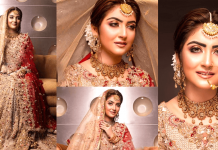