Last night, Ayeza Khan participated in Jeeto Pakistan’s Ramadan special show with actor Mikaal Zulfiqar. On this occasion, she looked very cute wearing white churidar pajama. On the other hand, looking at the viral pictures on social media, it seemed as if she was the Meenu of the drama Chupke Chupke. But as always, she managed to win the hearts of her fans.

If we talk about the age of top Pakistani actress and model Ayeza Khan in the year 2021, then she has turned 31 years old. And it would not be wrong to say that this actress is also the highest paid in the Pakistani showbiz industry. Because whatever drama she agrees to work on, the drama succeeds before it airs on TV. And this Ayeza Khan has become a trust with his fans.

Nowadays, the Ramadan special drama Chupke Chupke on Hum TV is becoming very popular among the people. People love Ayeza’s role in this drama because she has never played this role before. And before that, her drama with actors Humayun Saeed and Adnan Siddiqui, Meray Pass Tum Ho, has also achieved record-breaking success. Of course, this success is the result of her hard work day and night.

But in today’s article, we will see that Ayeza Khan participated in Jeeto Pakistan program for the first time after 7 years. And on this occasion, she won the hearts of her viewers again by wearing a shalwar kameez. On the other hand, Humayun Saeed and Mikaal Zulfiqar were also present in the program. So let’s take a look at the new pictures of Ayeza Khan from Jeeto Pakistan League.

In the comment section below, don’t forget to mention who watched the Ayeza Khan program while participating in Jeeto Pakistan League last night. Thanks! 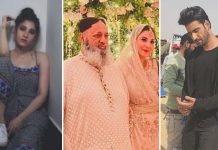