Some beautiful pictures of Ayeza Khan celebrating her family vacation in Dubai with her husband and children are going viral on social media. As can be seen in the viral photos, she is staying in a hotel in front of the Burj Khalifa. And to make her vacation memorable, she took pictures of herself with her children.

31-year-old Pakistani actress and model Ayeza Khan did not have much interest in studies, which is why she chose to enter the field of showbiz. And this girl worked day and night to make a name for herself in the Pakistani drama industry and today she has become a top actress. And no doubt every play director and producer wants to cast Ayeza Khan in their drama.

Ayeza Khan has achieved a milestone and is currently the most followed celebrity in Pakistan on Instagram. And one of the special things about this girl is that she likes to spend time with her family, her husband, and her in-laws just after the shooting. And she doesn’t like to go to friend’s gatherings and waste her time at all.

But in today’s article, we will see famous Pakistani actress and model Ayeza Khan on vacation in Dubai with her husband Danish Taimoor and children. In the viral pictures, it can be seen that the actress has put a bullying chain around her neck. And there is no doubt that she is staying with her children and family at the 7 Star Hotel in front of the Burj Khalifa.

Do you also follow actress Ayeza Khan and her husband Danish Taimoor on the Instagram account? If yes, You will definitely tell us in the comments section below. Thanks! 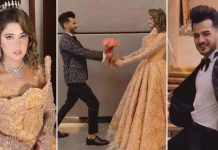