Pictures of Minal Khan and Ahsan Mohsin Ikram’s Walima have gone viral on social media. In the viral photos, it can be seen that on this occasion, Minal Khan is wearing a white sharara while her husband is seen in a black coat pant. And both look like princes and princesses at their wedding.

Rumors of Minal Khan and Ahsan Mohsin Ikram’s marriage have been circulating on social media for a long time. Because they were in love for almost two years. But now the good news is that the two are officially married. And they have become each other’s spouses.

Minal Khan is currently being followed by a large number of people on her official Instagram account. Because the special thing about this actress is that she can perform all kinds of roles with great skill and ease. And it is enough to say in praise of Minal Khan that the drama serial Ishq Hai running on ARY Digital these days.

But in today’s article, we will see famous Pakistani actress and model Minal Khan first shared photos of her Walima” with her husband Ahsan Mohsin Ikram on social media with fans. In the viral photos, it can be seen that Minal Khan looks like a princess wearing a Walima dress.

In the comments below, if you have not congratulated Minal Khan and Ahsan Mohsin Ikram on their marriage, you can do so now. Thanks! 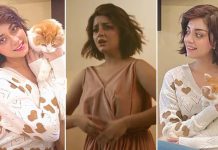