Umar Akmal is considered one of the best batsmen and all-rounders in the world. He has won many important matches for the Pakistan team due to his smoky batting. And no doubt this guy has a lot of passion for playing cricket. And he also tries to show new skills through his batting.

If we talk about the age of the famous Pakistani cricketer Umar Akmal in the year 2021, then he has turned 31 years old. And not many people know that he is the younger brother of wicketkeeper Kamran Akmal. But unfortunately both the brothers could not be selected in the squad of T20 World Cup 2021.

Just a few days ago, Umar Akmal created an account on TikTok where he keeps uploading his daily videos. Umar is also often criticized on social media for his comedy videos. But he does not listen to the people and they continue their work. And no doubt he is a man of simple temperament and morals.

But in today’s article, we will see cricketer Umar Akmal with his beautiful wife Amna and kids. As can be seen in the viral pictures, both are very happy. Some people say that Umar Akmal’s wife is a professional doctor. So let’s take a look at the new photos of Umar Kamal with his family.

Did you also watch cricket most of the time because of the batting of famous Pakistani cricketer Umar Akmal? If yes then you will definitely tell us in the comments section below. Thanks! 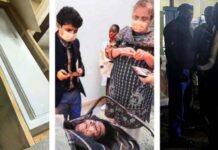