Nida Yasir is considered as one of the best actress and morning show hosts in Pakistan. She has been hosting a live Morning Show on ARY Digital for almost a decade. And no doubt this girl has a lot of vocabulary to talk about on every topic. And she now specializes in doing her own morning shows without reading the script.

47-year-old Pakistani actress and model Nida Yasir have also acted in successful Pakistani dramas. She also did a telefilm with Shaista Lodhi on Eid-ul-Fitr and Eid-ul-Adha this year. She has also won the hearts of the people with her stellar performance in the popular drama serial Nadaniyaan of “Geo Kahani”.

There is no doubt that despite reaching the age of 47, Nida Yasir still looks fit and smart. She has confirmed in her interviews that she takes great care of her health and her exercise, which is why she is not getting old even after reaching this age. And many people think that this actress is still a virgin.

But in today’s article we will see that like every year, this year too Nida Yasir celebrated Eid Milad un Nabi in her morning show and on this occasion she invited showbiz friends and made this day memorable. In the viral photos, it can be seen that on the occasion of the 12th of Rabi-ul-Awwal, every actress is wearing a headscarf.

In the comments section below, don’t forget to mention that you also like to watch ARY Digital’s Morning Show every morning with great interest. If yes, we will wait to read your comments. Thanks! 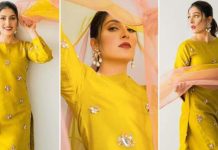