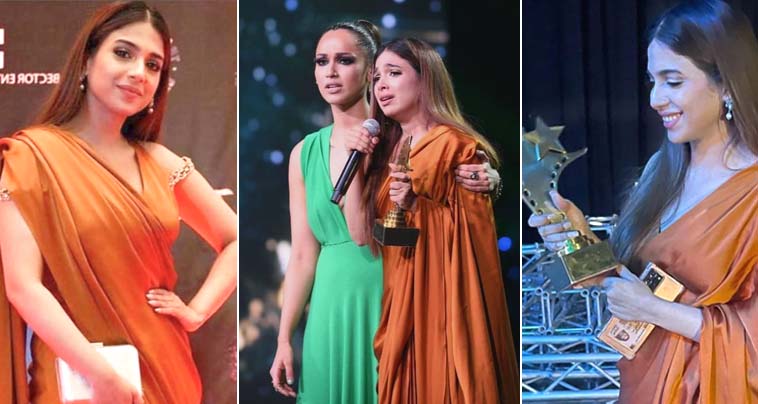 Sonya Hussyn is the most talented and accomplished actress in Pakistani entertainment industry. She is amongst the most prominent and established personalities of industry. All the efforts hardworking and devotion on the part of incredibly talented Sonya made her stand tall among all her contemporaries. Sonya Hussain’s presence in any project gives anticipation of the high success of project.

Sonya Hussyn is the most versatile actress we ever had. She is famous for her appearance in dramas “Kisey Chahun”, ”Hasil”, “Aisi hai Tanhai”, ”Ishq Zahe Naseeb”, and “Mohabbat Tujhe Alvida”. Mohabbat Tujhe Alvida is one of her blockbuster series. Following her debut role in drama series Dareecha, she started her unstoppable journey towards immense fame and success.

Sonya Hussyn despite her amazing and skillful performances couldn’t get any award in the 7 years of her career. Coming to an emotional point, Sonya Hussyn was present there at PISA Awards and was nominated for the category of best actress. Well, deserving Sonya Hussyn finally succeeded in getting an award for best actress. The beautiful and stunning actress on receiving the ever first award during her entire career got so emotional and readily broke down in tears out of happiness.

Faryal Mahmood was present on the stage with her. Sonya Hussyn became too emotional to speak. Faryal Mahmood and all the audience out there started cheering her. In an emotional state said actress spoke that she got nominated 16 times and it’s her first-ever award. She went on thanking everyone who contributed to her success. She received the best actress award for her appearance in drama series Sarab. She is of the view the dramas that are made on some intense social issues tend to get ignored by the masses. We wish Sonya Hussyn more success and power for her future. After clicking on the link below, watch the video of Sonya Hussyn receiving the award for the first time.

Click to watch another video. After winning the award, Sonya Hussyn can’t believe that she has won the award. See the happiness of the actress.

Do you guys like Sonya Hussyn’s acting skills? Which one project of her is your favorite? Do write to us in the comments section below.