Ayesha Omer is an immensely talented and most celebrated actress and model. Ayesha Omer got incredible fame following her appearance in the most famous comedy sitcom Bulbullay. Her character of Khoobsurat made her a household name. Ayesha is considered to be the fashion icon of our industry. The way she carries herself really makes her even more adorable and gorgeous. A lot of celebrities are also seen appreciating her dressing sense.

Recently the actress was off to her work and was seen vacationing in Tanzania. Her pictures from her traveling destination were really worth watching. She is a top model and has done numerous modeling projects. Ayesha Omer really knows how to flaunt her beauty. She is such a strong opinionated person and never hesitates from putting her stance on any significant matter.

Recently this incredibly beautiful and talented actress did a mesmerizingly sizzling Photoshoot. She has kept her look more simple and classy with a light blue long gown assembled with a classy bow belt. She is wearing a beautiful two-layered necklace. She is looking ethereal in this mesmerizing look. Ayesha Omer prior to this shoot appeared in a shoot with Shoaib Malik that garnered her immense criticism for doing a bold shoot with Shoaib Malik.

Ayesha Omer is continuing her journey towards more success and appreciation. Recently her appearance at the launch of Shoaib and Sania Mirza’s perfume became controversial for her abrupt action of jumping into their family picture. She always remains in controversies due to her bold appearance. We are just loving her beautiful Photoshoot. Here we have gathered amazing pictures of Ayesha Omer do have a look.

Have you guys liked the pictures? Don’t forget to write to us in the comments section below.

Nadir Ali and his wife welcome a baby boy 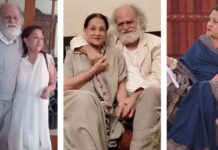