Sang-e-Mah is finally aired and most of its viewers have claimed to watch the episode just for Atif Aslam’s debut performance in drama series Sang-e-Mah. As far as Atif Aslam’s performance is concerned, it has certainly impressed netizens and they are all singing praises of Atif Aslam’s acting skills. People are of the view that Atif Aslam has literally done much better than they expected from him.

From the very first episode, people have started concluding that Atif Aslam has literally has done justice to his character and his entry is such an iconic one. The powerful performances from all of the cast have gotten praised by viewers. The starting scene showcasing a sikh offering his prayers is considered to be the bravest move to start a drama.

Now coming towards the Pashtoon audience, this drama couldn’t impress the Pashtoon community. They are offended with the whole concept, cast, and Plot of this drama. They are considering it a piece of nonsense that is hurting the image of Pashtoon. They are of the view that this is a terrible thing to see that all actors are nonpashtoon and are using fake accents. What was wrong with this idea to cast Pashtoon actors in the drama instead of mocking accent.

Sania Saeed’s character is also being criticized for its a deliberate endeavor to showcase Pashtoon culture full of violence and terror. Our Pashtoon brothers are hurt to watch that these dramas are leaving the impression of terror in viewers’ minds about Pashtoon. They have pleaded with the government to ban these dramas that are scrubbing their identity. Here are some of the comments. Give these a read.

One user highly praised the drama and commented something like this.

This user wrote that the role of Pashtuns in dramas is being portrayed as expressing what Pashtun culture.

Another user lamented that such dramas must be banned.

We would love to have your feedback about this drama series Sang-e-Mah. Comment here to share your views with us. 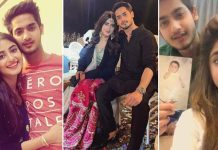