Actor and model Ali Kureshi is making waves on the internet for his spectacular and heart-winning performance in the drama series Betiyaan. Ali Kureshi is getting all the attention and spotlight for being incredibly good in this character. This debonair has done tons of modeling and acting projects and is again landing in hearts with his irresistible looks.

Here we have got amazing news for all of his fans. Ali has taken to his official Instagram handle and has broken the news of becoming a father of an angelic beautiful baby girl. This stunning hero made an anniversary wish to his loving wife in the most spectacular way. He went on to add more feelings and emotions to his post. Ali shared a beautiful picture of him with his wife Khadija holding a baby girl in her arms.

He wished his wife Khadija an anniversary and wrote that the 20th of November marked the day when they both got married and now this year on the 18th of November they are with their daughter. How a beautiful journey it is. This definitely ties a couple into stronger bonding and never-ending love. We are in an awe-inspiring mood after beholding this post and really gushing over their chemistry.

His wife Khadija is also quite an active social media user and fans love having look at her mesmerizing pictures. Khadija also keeps posting pictures of her with her husband.

Here we are presenting this gorgeous couple with their newborn baby girl. You guys must check these out.

How about these fits? Isn’t he giving major couple goals? Do share your reviews with us in the comments section below. Thanks! 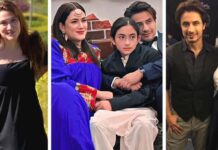